Perfect Square, a charming story by Minnesota author, Michael Hall and composer Charles Lazarus, provides ideas and inspiration for homeschool lessons. You are invited to explore and download the lessons you can use with your preschool and primary grade level children. Words, music, movement, math activities, and a music video for Perfect Square provides ideas and materials to teach concepts in multiple subjects.

The imaginative words used by author Michael Hall to tell the story in Perfect Square are a rich source for exploring and playing with text.

Word Play is fooling around with text; having fun with words; using words to explore movement, sound, ideas and more.

1. Find a new or used copy of the book at the library, bookstore, or on the web and read the story out loud. This web site presents a reading of the book with narrator: https://www.youtube.com/watch?v=uHpTBJAShXQ.

After watching/reading the story once, ask your child(ren):

Watch/read it again and repeat the questions. As children reply, connect their comments to the illustrations that show what they are describing.

2. Explore some of those words, and add a few you like. Choose some action word cards from the set included with this lesson. Tape the words on the wall where children can see them. Here are some of the words:

Read each card out loud and ask your child(ren) to echo the word. Ask what they think the word means. They can respond with words, motions or both. Look at the book illustrations to see what it looks like. If children don’t respond, you can provide a simple meaning.

As you read and speak the words out loud, use a dramatic voice that suggests the word’s meaning.

Encourage children to do the same.

Play with Words to Practice the New Vocabulary

3. Play with Words to practice the new vocabulary.

Read the book again and encourage children to echo the descriptive vocabulary out loud. They have some new verbs and adverbs in their vocabulary to use. Download word cards here.

What will you do?

Children will transform colored squares into something new by applying the actions from Perfect Square to their paper squares. As they manipulate and transform squares, repeat the descriptive language from the story.

The visual arts can strengthen a child’s understanding and use of the new vocabulary they’ve acquired. It also reinforces the story structure, action, and the BIG IDEAS in Perfect Square.

1. Look at a Paper Square

Look at a paper square with your child(ren). Connect it ot the main charaacter in the book and ask your child(ren) if they think it is a “perfect square.” How do they know it is perfect? (It has 4 matching corners and 4 equal sides. See the Math Connections Section.)

Ask what they think they could do if they wanted to change their square into something new. (use the word “transform” if you wish.) Recall what happened to the square in the book.

For their first round, help your child(ren) get used to manipulating the paper; tearing strips and pieces, poking or punching holes, and assembling pieces into something other than a square. Use the ideas for objects that appeared in the story.

Show them how to arrange their pieces on the larger sheet of paper and glue them down. Ask them to tell you what they’ve made.

3. Next, with a new square, challenge your child to create something that was not in the story.

4. Make the art and generate the text for a new book: The Perfect Circle! What could happen to a circle? Make up a story and create the art.

One definition of a square is a polygon with 4 sides of equal length and 4 right angle corners (90-degrees). Author Michael Hall’s definition is  “four matching corners and four equal sides.” (p.1)

1. What does your child know about squares? What is a square?

2. A Treasure Hunt for Perfect Squares

Propose a treasure hunt for perfect squares in your home. When your child finds something that looks square, measure the four sides to see if they are all the same length (or equal). And look at the corners to see if they match. Mark it with a post-it note. Or take a picture of each square you find to build a digital album for your child.

Make squares from a craft materials. Brightly colored paper is fun, but you can also use other materials to create square shapes:

How many squares does your child see in this painting? Use your ruler to check for sure. There are more rectangles than squares. 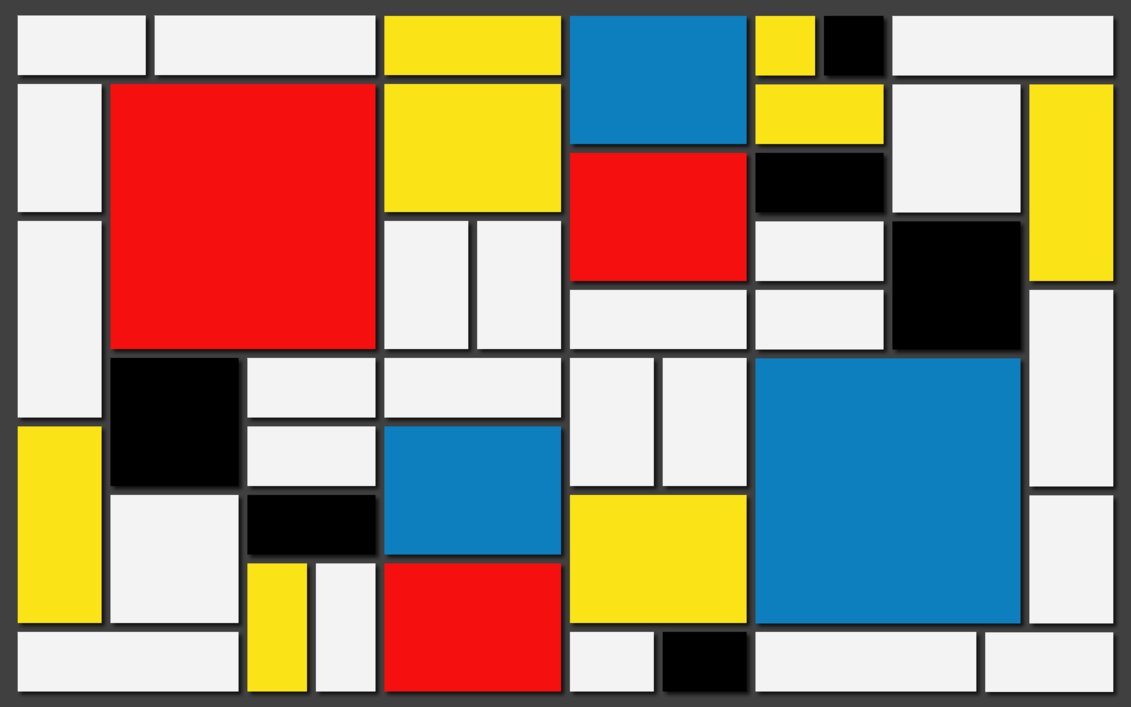 In 2014, Perfect Square became a musical composition. FRIENDS of the Minnesota Orchestra commissioned composer and Minnesota Orchestra trumpeter Chuck Lazarus to write a new piece for Kinder Konzerts™. It was transformed again in 2018 when the story and music became an animated video.

Watch together the Perfect Square video HERE. Then ask your child(ren) how the video was the same as the book and how it was different than the book.

2. Look at the Instrument Picture Pages

Eight instruments and a storyteller perform the piece. The video story includes both music and words. Check out these Instrument Picture Pages to see the instruments that perform in Perfect Square. Notice details about each. Say the name of the instruments as you point to a picture. They include:

Each instrument has its own voice! Except for the piano, you can hear each instrument played separately on the Minnesota Orchestra’s website. The musicians also explain how their instrument makes its sound, and then they play a piece (the Dallas Symphony website also provides instrument information with short excerpts).

Visit the Minnesota Orchestra  at https://www.minnesotaorchestra.org/community-education/teachers-students-and-parents/instrument-musician-guide

4. Listen for Instruments in the Perfect Square Video

You can locate places in the Perfect Square video that feature each instrument. Listen with your child and notice the places where instruments stand out.

5. Play with Sequence and Order

Understanding story events in sequential order is an important literacy skill for children to develop. Comprehending the structure helps them make sense of the arc of the plot and sequence in the story line. Focus on the sequence of events in Perfect Square with a song.

About the Author and Composer

Michael Hall is the author/illustrator of The New York Times bestseller, My Heart Is Like a Zoo, the critically acclaimed Perfect Square, Cat Tale, Frankencrayon, Red: A Crayon’s Story and It’s an Orange Aardvark!  Hall grew up in Ann Arbor, Michigan, where autumn was memorable for football, floats, caramel apples, and spectacular colors. He studied biochemistry and psychology at the University of Michigan in Ann Arbor, and worked in the field of biomedical research before becoming an award-winning graphic designer. His design work has been widely recognized for its simple and engaging approach.  Michael Hall now lives with his family in Minneapolis, Minnesota.

Check out his other books for children at https://www.michaelhallstudio.com/.

Charles Lazarus wrote Perfect Square in 2014. The work was commissioned by FRIENDS of the Minnesota Orchestra for Kinder Konzerts – a series of live concerts for preschool children.

Lazarus is a multi-faceted performer who has charted a unique course over his career including tenures in several of the best-known brass ensembles in the world, including Canadian Brass, Dallas Brass, Meridian Arts Ensemble, and the Minnesota Orchestra.

He is known for his distinctive blend of lounge/exotica and funk fired jazz. The trumpeter/composer’s eclectic career has been met with acclaim from critics worldwide. Lazarus made his main stage Carnegie Hall solo debut with the New York String Orchestra at the age of 19 while still a student at The Juilliard School in New York. He has been a member of the Dallas Brass, Meridian Arts Ensemble, Canadian Brass, and currently the Minnesota Orchestra. He has been on the trumpet faculties of Princeton University, St. Olaf College, and the University of Minnesota School of Music. In addition, he has performed and taught master classes in every across the United States, Canada, South America and throughout Europe and Asia.

Charting a unique course, Lazarus has created and premiered several original orchestra pops programs in recent years: A Night in the Tropics, American Riffs and Fly Me to the Moon: Big Band Love Songs featuring his jazz quartet and the symphony as equal onstage partners. He also performed the premiere of American Nomad, a trumpet concerto composed by Steve Heitzeg for  Lazarus and the Minnesota Orchestra.

You can hear him play at his website: https://www.charleslazarus.com/music.

Help us keep the music playing and create more Kinder Konzerts at Home lessons by making a tax-deductible donation to FRIENDS of the Minnesota Orchestra.

Click HERE for more information or to make a donation

FRIENDS of the Minnesota Orchestra

Sign up for FRIENDS of the Minnesota Orchestra emails »

Copyright 2020 - Friends of the Minnesota Orchestra
Back To Top
×